SoMy Plaza is built as a quadrangle around an outdoor pool, conveniently located just off the Calangute Baga main road. Inviting deck beds dot the periphery of the tiled pool, and the courtyard landscaped around the crystal water features an artful arrangement of pavers, low border hedges, indigenous trees and flowering shrubs. 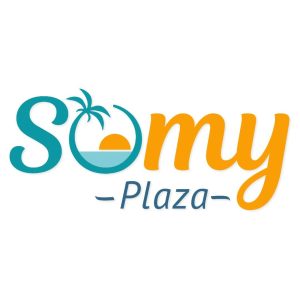 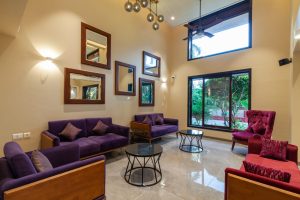 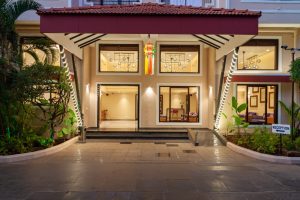 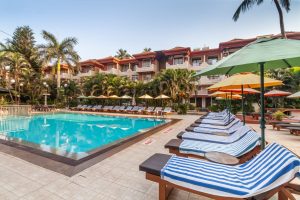 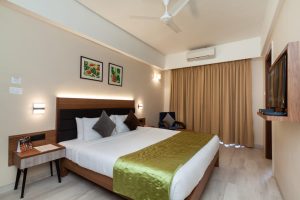 In the north, the state of Maharashtra borders Goa; in the south and east, the state of Karnataka. The vast expanse of the Arabian Sea in the west forms a magnificent coastline, for which Goa is justly famous. Panaji (Panjim) is the state capital, located on the banks of the Mandovi river and Vasco, Margao, Mapusa and Ponda are other major towns. The vast green expanse of the Sahyadri mountain range ensures that Goa has an abundance of water.

Mandovi, Terekhol (Tiracol), Zuari, Chapora, Sal and Talpona are the main rivers, that weave their way throughout the state and form inland waterways. The rivers and the sea abound in seafood – prawns, mackerels, sardines, crabs and lobsters, most popular with locals and visitors.

Since the arrival of the hippies in the sixties, Goa has been a major destination on the itinerary of international and domestic tourists. The tourist season in Goa begins in late September and carries on through early March. The weather in these months is usually dry and pleasantly cool. Then it gets fairly hot, around May and by end of June, Goa receives the full blast of the Indian monsoon, with sudden downpours and tropical thunderstorms. However, it is also during the monsoon that Goa is probably at its most beautiful.

Located at Dabolim, near Vasco, are Goa’s International and National Airports. Intra-state and inter-state bus networks also play an important role, in getting locals and visitors alike, in and around Goa. Popularly known as a tourist’s paradise, Goa is much more than just beaches and sea.

It has a soul that goes deep into unique history and richculture. And the most magnificent scenic beauty that India has to offer.

On 19th December, 1961, Goa was liberated by the Indian Army from Portuguese colonization and it became a Union Territory. On 30th May, 1987, Goa was conferred Statehood andit became the 25th State of the Indian Republic. A meeting point of races, religions and cultures of the East and the West over the centuries, Goa has a multi-hued and distinctive lifestyle, quite different from the rest of India. In this fact lies its charm.

All the communities have mutual respect for one another and this secular outlook has given Goa, a longand unbroken tradition of religious harmony. The warm and tolerant nature of the Goansallows them to celebrate and enjoy the festivals of various religions, such as Ganesh Chaturthi, Diwali, Christmas, Easter and Id, all with equal enthusiasm. Just before the austerities of Lent, the people of Goa celebrate Carnival, with a grand parade in Panaji (an international tourist attraction) and festivities across the state.

All celebrations are celebrated with Speciality Goan Food, which is a blend of the different influences that Goans had to endure through the centuries.

The staple food is fish and rice, both among the Hindus and the Catholics. Besides natural beauty, fabulous beaches and sunshine, travelers to Goa love the laid-back, peaceful, warm and friendly nature of the Goan people. After all, more than anywhere else on planet Earth, this is a place where people really know how to relax.

Night dinner close times
Shubhit Jani
Local Guide · 142 reviews · 882 photos
3 years ago
Last order taken upto 10:30pm
3 more answers
Is car parking available in hotel?
Chandrakant Varde
4 years ago
Yes parking available within the resort premises
5 more answers
Is there's Night life
Dragonworks Photography
Local Guide · 68 reviews · 16 photos
4 years ago
No, no here. Go out and have fun all night
8 more answers
Is this air conditioning
Prasad Rane
Local Guide · 39 reviews · 42 photos
5 years ago
Yes nice resort
Is this hotel off the main strip and reasonably quiet but still near good nightlife?
Somy Plaza ( formerly Somy Resort) (Owner)
2 months ago
We are set just inside of the main road, very quite where the rooms and pool are. Many restaurants and clubs are a short walk or drive away.
4 more answers
Breakfast very good & healthi
Neeraj Gupta
Local Guide · 606 reviews · 466 photos
3 years ago
Yes sure👷
(Translated by Google) what happens in breakfast (Original) Brekfast me kya hota hai
Somy Plaza ( formerly Somy Resort) (Owner)
Edited · 3 years ago
Our breakfast buffet has a large variety of dishes from juices, cereals, local Goan beads and toast, and a variety of items including some cooked freshly at site. Suitable for both vegetarian and non vegetarian. Most items change daily. You will surely love it.
4 more answers
Have all superior rooms been updated and are they just 1 room and a bathroom
Lee Tatt
Local Guide · 54 reviews
3 years ago
No they are updated excellent
4 more answers
wanted to book 3bhk for 10 people what would be the charges and what are the things including in thic package
A Aind
Local Guide · 46 reviews · 7 photos
3 years ago
Hi 3 bhk u get 3 rooms and one hall occupancy for max 7 ppl if u need talk to the agent and adjust the price ..kitchen rooms evry hotel stuff likes bedsheet bed towel max 3 to 4 k per day
1 more answer
hi we are booked in 19/02/19 was just wondering if the rooms have been upgraded as we was there last year christmas and new year and really loved it ,we have booked for a pool view this time would like to see the pool view rooms please x
Rahul Roychowdhury
Local Guide · 168 reviews · 2,412 photos
4 years ago
Nice place. Good food
6 more answers
23 se 27 tak he
Spa is available in resort
Nomesh Yadu
Local Guide · 15 reviews · 29 photos
4 years ago
Yes... it has a spa in the hotel called "So My Spa".
4 more answers
Is wheelchair available in this resort?
Михаил Ворoбьёв
Local Guide · 16 reviews · 9 photos
Edited · 4 years ago
Wheelchair not available
7 more answers
Is wheel chair available in this resort
Rajesh Arora
4 years ago
Nope
What is mode of convence from madgao rly stn to your hotel. How much to pay?
Divya Verma
5 years ago
We came by air ....and had booked a car before hand (for the entire duration of our stay ) ,which met us at the airport .....we google mapped and reached the location without a problem ......we handed over the same car at the station the day we were leaving ....so it was very very convenient......Enjoy your trip.
2 more answers
Milestone to reach from madgao rly stn.
Junaid Shaikh
Local Guide · 39 reviews · 103 photos
4 years ago
Take a prepaid cab from margao railway station

Your overall Rating of this property

To save your wishlist please login.

Why Book with us?